Scientists are studying the health effects of little-known compounds in cannabis: Kynurenine and Kynurenic Acid

There are several cannabinoids and terpenes major and minor which all have tremendous medicinal value although they work in different ways, they also contain flavonoids and omega 3 fatty acids. Italian researchers have reported for the first time the presence of three other compounds of interest: tryptophan , kynurenine and kynurenic acid.

In mammals, including humans, the neuromodulator kynurenine is a metabolite of the essential amino acid tryptophan, which we cannot synthesize and must acquire through our diet. the tryptophan is also our source of serotonin, itself a precursor to melatonin.

But only a small fraction of tryptophan is converted into serotonin. As'write the researchers in March 2022 in the magazine Journal of Pharmaceutical and Biomedical Analysis, about 95% of tryptophan is metabolized to kynurenine. Part of the latter is then degraded into kynurenic acid, which has received particular attention for its antioxidant, anti-inflammatory and neuroprotective activities.

Kynurenine and kynurenic acid have already been detected in other plants, including pumpkin, sesame, potato, broccoli, honey, herbs and spices, but it is not yet known for sure how they got there, write the authors. While plants can synthesize tryptophan, they don't metabolize it the same way animals do. Plants may be able to biosynthesize kynurenine and kynurenic acid by other means, or they may take them up from the soil through their roots. It is not yet known exactly why these compounds are present in plants, but there is some evidence to suggest that they may play a role in regulating plant growth.

Using high-performance liquid chromatography and high-resolution mass spectrometry, the study authors found tryptophan, kynurenine, and kynurenic acid throughout the cannabis plant, but generally in greater concentration in the leaves than in the roots or stem. Of particular interest is that kynurenic acid was detected at higher levels in cannabis as a whole than it has been so far in other plants, the authors write. Given that this compound also has interesting pharmacological properties and has been proposed as a functional food additive to treat obesity and modulate the gut microbiota, these findings make cannabis a new and potentially promising “alternative” source of this metabolite. .

"Given the important role that kynurenic acid plays in animals and humans, its accumulation in the leaves opens up a new branch of cannabis chemistry that makes this plant even more appealing than it already is," conclude the authors.

Also using liquid chromatography coupled with high-resolution mass spectrometry, researchers from the University of Basel in Switzerland have presented a new analytical method to characterize in cannabis flower the presence of cannabinoids not called THC or CBD, which can be over 150.

to read :  The combination of cannabinoids and chemotherapy against leukemia

"The overall goal of this study was to examine the ability of [these] techniques to distinguish cannabis strains from each other by their minor cannabinoid fingerprint," write the authors in their article published April 20, 2022 in the journal Analytical and Bioanalytical Chemistry.

In other words, they sought to extend the traditional cannabis classification system based on THC-CBD balance (Type I: THC dominant, Type II: Mixed, Type III: CBD dominant) to account for the presence and relative levels of a range of other cannabinoids, specifically their acidic precursors, such as cannabielsoinic acid (CBEA), cannabivarinic acid (CBNVA), and tetrahydrocannabibutolic acid (THCBA).

To do this, they studied the chemical signatures of flower samples from 45 individual plants representing 18 different strains of cannabis. They identified similarities and differences between varieties and assessed intra-variety differences in cannabinoid contents of plants grown and stored under identical conditions.

The paper represents more of a proof-of-concept than an attempt to codify new categories, but the authors clearly hope it lays the groundwork for a more advanced “cannabinoid footprint” in the future. "In-depth product-level knowledge is essential for product standardization, considered fundamental to ensuring reproducible effects in humans," they write.

In 2019, Italian researchers also accidentally discovered two cannabinoids namely THCP and the CBDP by studying an industrial strain of hemp. The same team had discovered THCB and the CBDB the previous year, but being able to identify THCP was hugely significant because it could help us better understand why certain low-THC strains remain extremely potent, both in their high and their medicinal value.

to read :  Endocannabinoid system and CBD: instructions for use

This is why cannabis strains that contain more THCP are more potent than those that only contain THC.

On the other hand, they also discovered CBDP, also known as CBD-C7 or CBD-heptyl. Unfortunately, we still know a lot less about CBDP than THCP, but researchers gave up studying it simply because it was less effective at binding to CB1 and CB2 receptors.

Although there is still a lot we don't know about THCP, Italian researchers have found that it may have potential for pain relief, hypomobility, and temperature reduction in the rectum.

"In our opinion, this compound should be included in the list of major phytocannabinoids to be determined for proper evaluation of the pharmacological effect of cannabis extracts administered to patients," the researchers said. “In fact, we believe that the discovery of an extremely potent THC-like phytocannabinoid may shed light on several pharmacological effects that are not solely attributable to THC,” they conclude.

For those who want to explore what THCP feels like, you might be interested to know that some cannabis brands are already selling THCP products on the market.

Even though cannabis is legal in one form or another in a majority of US states, researching cannabis is an entirely different matter. Cannabis research in the United States is notoriously difficult, which is why many of these recent new discoveries of compounds in the plant are being made by researchers overseas. 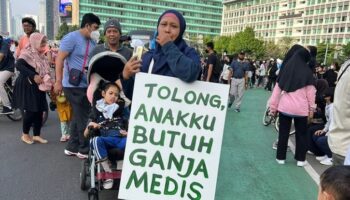