The road to Zion

What started as a syncretic religious movement at the beginning of the last century has also affected somewhat less tropical areas like London, Ukraine, Florentin and the rest of the world… But what are the origins of the Rastafari movement? What is the history of the religion of Ganja? And why is it related to the foundations of Judaism? Responses from Jamaica. 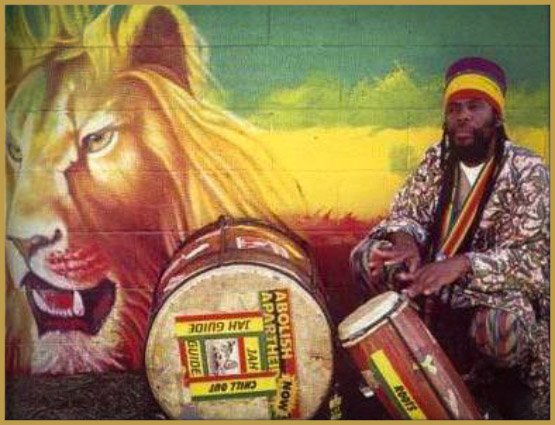 The person at the origin of the Rastafari movement is Marcus Garvey, born in 1887. Jamaican living in Harlem, he advocated a nationalist doctrine that wanted to unify blacks around the world. He adopted the slogan "One God, One aim, One destiny" (One god, One goal, One destiny) and founded the UNIA, the “Universal Association for the Development of Negroes”.

“…. It was then that I saw before me the new world of the Black man, not a world of pawns, serfs, dogs, but a Nation of men determined to leave their mark on civilization and to shine on the Human race a new light. I could no longer stay in the shadows… ”

Marcus Garvey was appointed “Interim President of Africa”. He also chose a Black Nation flag: Red, for the blood that was shed, Black, a symbol of pride, and green, the promise of a better life.

Garvey, considered by his followers to be the black king, also predicts that a black king would be crowned in Ethiopia. Garvey will die in loneliness in the 1940 years

"Look towards Africa where a great black king will be crowned, for the day of deliverance is near".

According to Ethiopian tradition, and for the Rastas, Hailé Selassie is the descendant of Melenik I, the fruit of the legendary loves of the Queen of Sheba and King Solomon, the 225th descendant of the dynasty. The Rastas then advocate the realization of the biblical ideal.

The term Ras Tafari was then adopted: the word comes from the terms "ras" meaning "head" or "chief", and "Tafari", "the one who is feared", which is the first name given to Hailé Selassie I at birth, Emperor of Ethiopia from 1930 to 1974. For the Rastafari Hailé Selassie, the Negus is seen as the black christ, the messiah and also as the prophet of Islam.

This man of real charisma had ascended the throne of Abyssinia in 1930. He had made himself known by resisting the assault of Mussolini's troops in October 1935. A brave resistance but without hope. Relinquished by the League of Nations, the empire of Haile Selassie gives way under the pressure of the Italians, which led him to take refuge in Israel, at the hotel "King David" of Jerusalem and London in May 1936, or the Negus, become an anti-fascist hero, continues the struggle and rallies support.

Selassie, symbolized, better than any other, the desire for independence of Africa, is one of the fathers of Pan-Africanism.

The father of the Rasta movement

Leonard Howell, lives in the coronation of Haile Selassie the realization of the prophecy of Marcus Garvey. He founded the first rasta community. In the 40 years, Howell's rasta community had grown. She then settled on the outskirts of Kingston and built a shanty town called Back-a-Wall. He was shaved in the 60 years ...

The oppression against the Rastas was strong, despite the rise of the Elder Howell movement was arrested for use and possession of marijuana, like thousands of other rastas ... The rastas were implacably persecuted by the police and the elites who consider Rastafarianism as a powerful political force that unifies marginalized members of society.

Most rastas then went to take refuge in nearby Trenchtown.

to read :  The alternative to herbicides with hemp mulch

The visit of Haile Selassie

In April 1966, Haile Selassie, Emperor of Ethiopia, went to Jamaica for a diplomatic visit. The one the Rastafaris considered a living god and called "Jah" was greeted at the Kingston airport by thousands of tragedy rastas.

The emperor did not know the beliefs of the Rastas and was afraid ... But his visit marked the spirits and increased the fervor of the Rasta community.

Many converted after this visit.

Death of the leader of the oldest empire in the world ...

Haile Selassie died a little less than a year after being dismissed. Strangled, the August 25 1975, on the orders of Colonel Mengistu Haile Mariam. The last king of Ethiopia was languishing in a dungeon since his deposition, the 12 SEPTEMBER 1974, by the "revolutionary" military junta.

Haile Selassie was a myth. He owed his prestige in part to an exceptional lineage. "King of Kings", "Conquering Lion of the Kingdom of Judah", "Elect of God", leader of the oldest empire in the world ...

At the fall of communism, in 1992, the remains of Haile Selassie, buried under the office of Mengistu, are found. In November 2000, funerals are finally organized and the King of Kings is buried in the crypt of the Orthodox Cathedral of the Trinity, Addis.

For the rastamen of Kingston, Jamaica, who traveled hundreds for his funeral, "King Selassie", even dead, is still a prophet. Jah lives!

Split of the Rasta movement

The rasta movement will eventually split into several movements, the best known of which are the Twelve Tribes Of Israel of which Bob Marley was a part, and the Bobo Shantis, who believe in the divinity of their leader, Prince Emmanuel, self-proclaimed third branch of the Holy Trinity. .

Today, the vast majority of rastas do not belong to any movement and live their faith as they see fit.

Italian food should also normally be "organic"; the rastas reject what is not natural (coloring, preservatives).

The other values ​​of the Rastafarian religion are also taken from interpretations of the bible, mainly from the chapter of "Numbers". In this chapter where "The Lord spoke to Moses" it is for example said that when someone consecrates himself to the Lord, "he will abstain from wine and intoxicating drink": the rastas thus reject alcohol and all drugs on principle.

The i-tal diet, vegetarian (sometimes vegan) and without added salt is one of them. Refusal to consume alcohol, pork and shellfish are prohibited.

The Rastas smoked hemp, called ganja in Jamaica. This herb was introduced to the island by British colonists who brought it back from India. The Rastafarians considered it a biblical herb, the consumption of which was a sacrament. The ganja is considered to be the fruit of the tree of life and only used for spiritual upliftment.

Psalm 104: 14: He causes grass to spring up for cattle, and plants for man's needs, that the earth may produce food; Psalm 18: 9: Smoke arose in his nostrils, and devouring fire came out of his mouth; from them there were burning coals.

The word "JAH" is derived from the name of "Yahweh", we can interpret Ganja by Gang-Ja, ie by "members (Gang) of Ja". It is commonly established that the plant helps in meditation, spiritual upliftment and even the study of Torah.

Leaders of the Church of Haile Selassie claim that the sacramental use of ganja is analogous to the doctrine of transubstantiation, which states that bread and wine are transformed during Christian communion services into "body and soul. blood of Jesus. "

Smoking the Ganja among the Rastas is never done in vain.

The symbol of resistance in Babylon

Ganja is the symbol of resistance in Babylon, colonial England, the daughter of Western imperialism. Babylon, a biblical city of all perversions, symbolizing the oppressive social order for which rastas have a deep aversion.

La Ganja alters the values ​​and goals of peoples, removing the need to chase after the definition of success in Babylon… La Ganja alters consciousness in such a way that users prefer to live in a "natural creation more than to live in it. the city ".

Ganja induces a state of mind in which material things and the world of Babylon become secondary, so that the "herbalized" person "begins to see himself as a part of creation" rather than as a consumer of products and things. self-destructive artificial pleasures.

Cannabis use is considered the symbol of secular exercise outside the authority of Babylon. The Rasta community bravely resisted the laws and executive power of Babylon, which was embodied in governments and law enforcement.

The "return" to Ethiopia becomes an obsession, just like the image of the first Jewish inhabitants in Israel, they want to leave Babylon to return to the land of Jah.

“This approach is very similar to that of the Zionists with the Odyssey of the Exodus”. Bruno Blum.

The Rastas embrace the myth of lost tribes who have lost their way to Caribbean islands, through Ethiopia. Rastas also have rituals close to Semitic religions, women cover their hair, and are impure during their period.

In the same way, the Numbers saying of the person submitted to God that "the razor will not pass over his head", the Rastafarian religion advocates the dreadlocks, also symbol of the roots of the earth and of the lion of Judah, and of the ganja .

The Ark of the Covenant, containing the Tablets of the Law and the staff of Aaron, whose Bible loses trace after Solomon, was entrusted to his eldest son Menelik, according to the Hebrew tradition, to preserve it greed.

Menelik 1st (ascendant of Hailé Sélassié) left Jerusalem, accompanied by several priests of high rank, of which the Falashas, ​​black Jews of Ethiopia are the descendants… The legend of Hailé Sélassié completed to confirm Ethiopia as promised land for the Rastas, Zion, Zion (pronounced Zayan) sung by the psalms ...

According to Alpha Blondy: "Jerusalem has a great spiritual dimension for the Rastas. Even if they have never seen Israel, it is engraved in their subconscious. "

The prophecy of Bob Marley

Despite the predominance of cannabis in Jamaican culture, only 5% of the population belongs to the Rastafari movement. It was only in June 2014 that the Jamaican government adopted a policy of non-criminalization, allowing the ritual and recreational use of marijuana.

These days the government plans to establish new tourist services revolving around the Ganja. The sale will be made in small quantities and will be monitored ... The Rastafari were persecuted in the past for the Ganja and their membership in the movement, and this for many years.

Today they believe that the disposition of the Jamaican government (under US influence) still deprives them of a total freedom, grass being an integral part of their way of life and their worship, is their Responsibility !!

However, improvements against the injustices of the past and the legitimate use of the plant on a medical and spiritual basis is in the process of becoming universal, regardless of religion, race or sex ... Bob Marley's prophecy is ongoing of achievement.

Just because you didn't have to pay for this information doesn't mean we don't need help. At Canna-Media, we would continue to fight disinformation and medical separatism. To maintain information, your support is essential
Donate in crypto
Tags : Agriculture / GrowGanjaPlantingRasta