Smoking and drinking reduces the risk of liver disease by 55%.

Heavy alcohol drinkers who also smoke weed "can reduce their chances of developing fatal liver diseases such as cirrhosis by up to 55%," says study

For those who drink and consume weed, the chances of developing serious liver conditions are reduced, including cirrhosis and cancer. Cannabis is endowed with anti-inflammatory properties and its compounds are currently the subject of hundreds of studies.

However, scientists say they are not sure why cannabis benefits the liver in combination with alcohol. The study was led by Dr. Adeyinka Charles Adejumo of North Shore Medical Center, Massachusetts.

Of the 320000 people studied who had a history of alcohol abuse, 90% had never smoked cannabis. About 8% of them smoked occasionally and 2% depended on it, which means that they experienced withdrawal symptoms when not taking the drug.

Both dependent and non-dependent smokers had a 45% lower risk of alcoholic steatosis, or “fatty liver disease”. The risk of cirrhosis - scarring of the liver that can lead to liver failure - was 55% lower. The risks of steatohepatitis, a type of fatty liver disease, were also 43% lower. In addition, the risk of hepatocellular carcinoma (HCC) - the most common form of liver cancer - was 38% lower.

They wrote in the journal Liver International: "Although cannabis has demonstrated anti-inflammatory properties, its combined use with alcohol and the development of liver disease remains uncertain."

Cannabis against fat in the liver

The team noted that receptors in the body that respond to compounds in cannabis have the ability to suppress the collection of fat on the liver, thus protecting it from disease. Previous research has already revealed that cannabinoid receptors in the liver are potential targets for the treatment of liver disease.

However, neither study clearly determines which part of the cannabis plant can be protective.

to read :  Decline in drug and alcohol use in US states that have legalized

Tetrahydrocannabinol (THC) is the psychoactive compound that creates a "high". But there are hundreds of other compounds in cannabis plants.

Cannabidiol (CBD) is believed to help reduce anxiety and inflammation and has taken the health care market by storm.

But despite promises, experts are unlikely to advise starting smoking cannabis if a patient has an alcohol-related disorder.

Some studies suggest that patients who try to recover from a hangover faster also smoke weed.

Dr Bukong said: "My research group is currently working to find out which cannabinoids or cannabinoid formulations will provide the best therapeutic benefits for specific liver diseases." 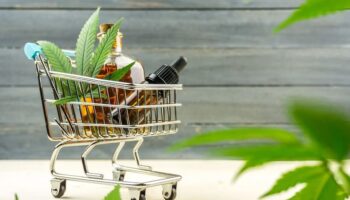 Measure of the legal market basket 2020