How to ride a cannabis cigar

A cannabis cigar, or cannagar, is one of the richest and most exotic methods of consuming cannabis. When it comes to rolling a marijuana cigar, there are some notable differences when compared to a tobacco cigar. The process of rolling a cannabis cigar involves rolling the weed around a stick that is in the center. The stick is used to help shape the cylindrical shape of the cannagar. Unlike smooth tobacco leaves, cannabis buds are bumpy and uneven, making it difficult to achieve the smooth, classic cigar shape we're so used to seeing. Here is the method to make cannagars without addicts:

The popular name for this type of cannagar is called a Thai stick. The history of the Thai stick dates back to the early 70s, when GIs were probably first introduced during the Vietnam War, while on leave in Thailand. The potency of these Thai sticks was much higher than the weed seen in the West, so its popularity quickly blossomed ...

- Liquid cannabis resin oil (can be substituted for a mixture of sugar and water ...), or rosin oil (a vegetable resin left over from pine resins pinus palustrus)

Take a bamboo skewer and remove all the threads. Then coat it with a single layer of liquid cannabis resin oil / sugar and water or rosin oil

Start squeezing your weed with a mug. Tighten the bud against the skewer. Make sure there is an equal amount around each part of the skewer.

Now start tying the marijuana to the skewer with your hemp rope. Tie it tight enough to limit the amount of bud falling. But make sure it's not too tight (this can be tricky). Put in the refrigerator for two days.

Carefully remove the hemp rope. It is also essential to remove any knots that you may have tied for additional security.

Gently relax the line as you try to avoid crumbling the dried pieces of grass from the skewer.

Use large, sun-shaped leaves to seal the cigar well. After you've wrapped it all the way through, go ahead and add a final layer of resin to keep everything in place.

After covering the resin, start attaching the hemp rope around the brooch covered with leaves.

After completely drying, remove the wire and slowly pull the bamboo skewer to form the final cigar. Finally, for storage, place the cannagars in an airtight container.

What separates a good cannabis cigar from a bad one is based on the same principles of a tobacco cigar: you have to roll it evenly.

Use the appropriate wrapping sheets (young leaves vs. old leaves and differences in taste). And most importantly, use quality buds. 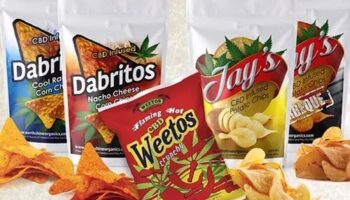 How to use CBD crystal