Content hide
1. How to disinfect cannabis and is there a replacement for radiation
1.1. How cannabis develops a fungal infection
1.1.1. Disinfection methods and loss of potential
1.1.2. Results of the different experiments: gamma and beta projections
1.1.3. Cold plasma disinfection

How to disinfect cannabis and is there a replacement for radiation

How to disinfect contaminated medical cannabis? Should we find a substitute for radiotherapy or not? Because the constituents of cannabis, cannabinoids and terpenes, are sensitive to heat and light, sterilization methods using heat or UV radiation can adversely affect them. Therefore, a method of disinfection that does not expose the cannabis to light or heat is needed, and the most common method uses ionizing gamma or beta radiation. In order for medical cannabis to be mold free, it usually undergoes radiation disinfection before it is marketed.

Israeli research has studied the effectiveness of disinfecting cannabis, as well as that of a new method that does not use x-radiation. Consumption of cannabis with a high concentration of mold can cause dangerous fungal infections in patients with often weakened immune systems. This is a known issue in the medical cannabis industry, which is currently emerging following new data and a formal warning issued by the Center for Disease Control in the United States (CDC) earlier this month.

How cannabis develops a fungal infection

Mold and other types of fungi are spread with the help of spores (the organ of dispersal and multiplication characteristic of the plant kingdom), which are a kind of tiny particles. In order for mold to infect a person, its spores have 3 things to do: 1. infiltrate the host body, 2. grow and 3. multiply.

These three stages are collectively called colonization and when the spores are successful they form what is called colonies and it is then that there is a fungal infection of the host body. As long as the mold spores are alive, they will always try to establish colonies where they can grow and reproduce, which is why they are called colony forming units, in microbiology a colony forming unit (CFU) is a unit used to estimate the number of viable bacteria or fungal cells in a sample.

In the case of cannabis mold, the user is contaminated by inhaling the mold spores during combustion. Tobacco also has mold spores, but the cotton filter in tobacco cigarettes blocks them, unlike the cardboard filter in the Joint. Infiltration into the body of the spores is the easiest sequence. The next two stages of the process (consolidation and growth) are already more complex. In most people, the immune system will respond at this point by attacking and killing the spores before they complete the colonization process and proliferate. That is why, although mold in cannabis is not uncommon, a small number of users develop a severe form of infection if they are in good health.

However, for medical cannabis the situation is quite different. Indeed it is intended for people with a failing immune system, for example for cancer patients or patients with AIDS. When the immune system fails to fight them off, mold spores manage to grow and multiply at an increasing rate and establish colonies. The result can be fatal, especially when it comes to types of mold that produce mycotoxins (fungal toxins). The more live cannabis mold spores there are, the higher the risk of getting a fungal infection. As long as it is alive, the mold will continue to grow in cannabis at an ever increasing rate, so the concentration of fungal colonies will continue to increase. If it is a type of mold that produces mycotoxins, their production rate will also continue to increase, so that the stored body will fill up with more toxins. When it comes to patients with weakened immune systems, strict control of the number of spores that inhabit the medical cannabis they consume is necessary. This is the reason why medical cannabis needs to be disinfected.

In Israel, when the concentration of mold exceeds the maximum threshold authorized by the Ministry of Health (2000 CFU per gram of inflorescence), the cannabis must undergo disinfection.

Disinfection methods and loss of potential

Delivery charges preliminary studies Incomplete studies have shown that irradiation does not appear to harm the cannabinoids in the plant, but to some extent affects the terpenes and destroys an average of 10-20%. The loss of terpenes following screening varies from species to species, reaching up to 38% for some terpenes in some strains. Terpenes are best known as substances in cannabis that give off their aromas and flavors, but in recent years research has also started to reveal the medical potential of these substances. The injury of terpenes is therefore also to the detriment of the taste and smell of cannabis, but perhaps also of its medical virtues.

In the new study by researchers at the Agricultural Research Administration at the Volcanic Institute and Hebrew University, they attempted to test the effectiveness of beta and gamma screening methods in disinfecting cannabis, as well as the effectiveness a new method of cold plasma disinfection, different and without radiation. The screenings were carried out at the facilities of Shore-Van Screenings Ltd. from the Sorek Nuclear Research Center. Cold plasma disinfection was performed by NovaGreen from Kibbutz Megiddo.

The study examined the effectiveness of the three disinfection methods in question: gamma, beta, and cold plasma, reducing the CFU concentration of molds in Israeli medical cannabis, as well as cannabis flowers grown at the Volcanic Institute for the experiment. in which half were intentionally infected with Botrytis cinerea, a common mold, also known as gray mold.

Artificial adhesion has resulted in particularly high mold concentrations in the flowering parts of the plant, with the aim of examining the effectiveness of disinfection methods even in "extreme cases" where mold levels are particularly high. It is important to note that even so-called "normal" flowers that were not intentionally infected by this process naturally contained such antimicrobial infections, however, flowers that were predisposed with mold artificially contained much higher concentrations of CFU. up to 100 times more.

The three disinfection methods tested were very effective in reducing the concentration of CFU and Pathogens in each sample tested.

Results of the different experiments: gamma and beta projections

Ionizing radiation causes the formation of free radicals that disrupt the chemical and metabolic function of living cells (such as molds and bacteria), causing them to die. The advantage of ionizing radiation is that it does not expose cannabis to high heat or UV rays which can damage its components, nor does it leave dangerous residues in the product at the end of the process, unlike, for example, , fungicides.

In the gamma radiationRadiation, the most common type, is derived from the decay process of radioactive materials. It may sound scary, but the properties of gamma radiation are similar to those of x-rays and, like it, quickly fade, so that no radiation residue remains in the projected product.

Currently, there are only a few studies on disinfecting cannabis with ionizing radiation, but many studies have shown that it effectively disinfects foods and spices without compromising their quality. In addition, studies on the long-term consumption of irradiated foods are safe for human health, and also as nutritious non-irradiated foods.

Le beta radiation is a more recent technique in which the radiation is produced by an electron accelerator, without using any radioactive material, but the principle is the same: disinfect the product using an ionizing beam.

Experimental beta tests were even more effective at disinfecting cannabis from gamma rays. They were also tested for Israeli medical cannabis and at the end of the test, beta screening was able to reduce the concentration of mold to an absolute or almost zero in all the experiments carried out.

While gamma and beta radiation use radiation to disinfect cannabis, cold plasma works very differently. Plasma is the fourth state of matter after the fluid, solid and gas state. Cold plasma is generally produced by operating a high voltage electrical charge within atmospheric or sub-atmospheric pressure.

Many studies have shown the effectiveness of cold plasma in neutralizing a wide range of bacteria, and some have shown that it is even more effective in reducing the concentration of CFU in molds. It is not known exactly how this happens, but contact with the cold plasma damages the cell walls of the fungal spores and causes them to die.

Plasma has also been shown to be particularly effective against Aspergillus, one of the most common types of mold. Plasma not only kills Aspergillus but also reduces the levels of mycotoxins (fungal toxins) that it has already released in the inflorescence.

Another intriguing feature of plasma is its ability to break down pesticide residues, with the resulting decomposition products being much less toxic than the parent material. In this way, in theory, it can not only solve the bacteria and bacteria problems in cannabis, but also significantly reduce the concentration of toxic pesticide residues left after harvest.

As show the results of the experiment, plasma disinfection reduced the worker concentration to 0 or more in all "normal" inflorescences grown at the Volcanic Institute (those that were not intentionally infected with mold). The researchers conclude that this is also a fairly effective method, but current technology is too slow because it can only use a small amount of the herb at a time (400 grams).

En conclusion, radiation therapy is a particularly effective method of disinfecting medical cannabis, allowing immunocompromised patients to consume it without fear, although the full effects of radiation on cannabis are not yet clear. Cold plasma disinfection is starting to be a potential alternative, but at this point it can still only be done on small amounts of cannabis at a time, so most medical cannabis companies are likely to continue to project. their product for the foreseeable future.

Another method of antiseptic for cannabis around the world is cold mist disinfection but it is not yet known how effective it is in reducing cannabis levels, and no less important, if it does. done without affecting cannabis and its components, cannabinoids and terpenes. Experiments are underway and their results should be published soon.

It should be noted that despite the use of ionic rays on medical cannabis and despite the obligation to label any food product subjected to irradiation, cannabis is not always labeled in this way in most countries legalizing the plant. 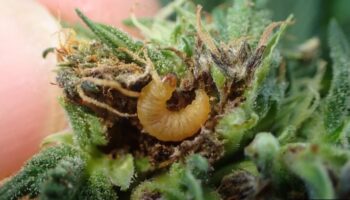