February 22: recreational weed will be legal

The most important battle in Mexico has just been won: the chamber of the Supreme Court of Justice of the nation (SCJN) has published case law in which it states that all judges can grant prescriptions to those who need them, for the recreational use of cannabis. The resolution will be published in 6 days and will continue towards its full decriminalization.

Until now, judges could refuse the protection of self-consumption issued by the Federal Commission for Protection against Health Risks (COFEPRIS), since the law partially prohibited consumption.

En last november, the senator and current secretary of the interior, Olga Sánchez Cordero, presents a proposal to regulate the plant for personal, scientific and commercial purposes.

Following the decision of the First Chamber, the issue moves forward with significant support to the Supreme Court, where it would endorse the general statement to establish case law against five articles of health law that would prohibit personal use or consumption, as well. than the sowing, cultivation, harvesting, preparation, possession and transport of the plant. Lawmakers will have 90 calendar days to amend or repeal these five sections.

“The initiative aims to end once and for all the war that continues to kill us,” said Sánchez Cordero

Once the decision is published in the official journal Semanario Judicial, all federal judges across the country will be required to provide protection to people who request legal consumption.

THIS FIRST CHAMBER UNDERSTANDS THAT THE FUNDAMENTAL RIGHT TO FREE DEVELOPMENT OF THE PERSONALITY ALLOWS, SO TO SAY, THAT ADULTS DECIDE WITHOUT INTERFERENCE WHAT KIND OF RECREATIONAL OR LEISURE ACTIVITIES THEY WISH TO EXERCISE, AS WELL AS TO ENJOY OR NECESS. MAKE THIS CHOICE REAL “, underlines the thesis.

This opens the door to anyone who wishes to start their own proceedings before the COFEPRIS, then seek the protection of a judge. It should be remembered that case law does not bind any authority other than those of the judicial power, so that neither the police, nor COFEPRIS, nor the Ministry of Health are required to recognize this right until the law is issued. In other words, you always run the risk until further notice.

The country is positioned as the second largest market in the region, after Brazil, and these newly created companies are ready to take advantage of this activity.

In this context, companies have started to take an interest in the CBD market: the product that comes from the plant that does not contain any psychotropic agent.

In the 60 countries that are on the verge of legalizing marijuana, more than 90% of cases focus on the development of products containing CBD for industrial and medical reasons. The most important region in this development is Asia, and in Latin America, Brazil leads the consumption. Then there are Mexico, Colombia, Chile and Argentina, explains Giadha Aguirre, Executive Director of New Frontier Data.

These pays have a market potential of $ 10 billion, which opens up the possibility of creating a powerhouse in CBD production alongside Asia, Canada, Europe and the United States.

China is the largest producer of hemp, accounting for 95% of the industry. This is why, according to Aguirre, the countries of Latin America should join forces. “The growth of the region will depend on a lot of factors, like the lower cost of culture, like in Thailand and Indonesia, or innovation, like that of the United States and Canada, which is the most important market. mature.

The problem with Europe, which ranks second for consumption, is that it cannot grow or produce, and that is why Latin America, Asia and Canada are competing for know who will export more. 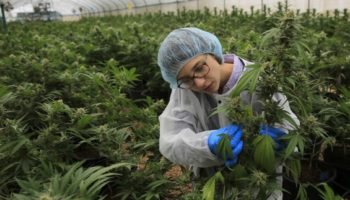