The history of hybrid grass from the West Indies

Jamaican Cannabis as the “champagne” of cannabis culture; a hybrid herb whose "original" strain remains unknown to the public, but not to the Rasta community which seems to protect its culture well.

Jamaican cannabis is special, it is not a native herb; it was imported at a reduced price from India at the end of the XIXth Century after slavery was abolished.

Moreover "Ganja" which means Cannabis in everyday language is a word of Sanskrit origin which designates "factory". Sanskrit is an Indo-European language of the Indo-Aryan family, once spoken in the Indian subcontinent.

It should be noted that many strains from Central America, notably Mexicans and Colombians, are likely to have crossed the sea to this island where African slaves forcibly emigrated. The geographical position of the island is there for many, a crossroads for drug trafficking with the USA ...

Jamaican strains were not uncommon in the late 60s; they have become scarce since. These green and brown species are still considered to this day as the top of sinsemilla, a very strong form of marijuana, similar to skunk which contains a very high level of Tetrahydrocannabinol (THC).

The word sinsemilla is made up of "Sin" which can be translated as "sin" or "outside"; Sin was the Babylonian God of the Moon, one of the most important deities of the pantheon of Mesopotamia who is considered to be the father of the god symbolizing the solar star ... Sîn appears in many hymns and ritual texts as a deity linked to fertility .

We add the Spanish “Semilla”, which simply means “seed”. Sinsemillia translates to “no seed”, or “seedless” a female marijuana Ganja that is not “fertile” or “fertilized,” which will let her produce a high level of resin, designed to trigger Fertilization.

Sinsemilla is a technique of growing cannabis by not mixing females with males during flowering. These females thus developed without seed contain more of the active ingredient of THC. This technique increases flower production. The female plant, once deprived of the pollination of males, devotes all its energy to the production of sexual organs (pistils and calyces). The Flowers are found to be more fleshy, heavier and fragrant, but also sweeter and above all more loaded with THC ...

This technique is known to everyone who cultivates medicinal cannabis, which allows for a more concentrated herb to be obtained from it, and for smoking smaller amounts while reducing the tar.

The proximity to Colombia on the drug trafficking routes between Florida and South America makes it plausible that the Colombian varieties are pre-dominant in Jamaica, which can already be seen in the form of the leaves, the type of seeds and general morphology. But these varieties are not the original Jamaican strains. Although similar to Colombian strains in larger and thinner, lighter green; Jamaican produces a very deep psychoactive effect, a clearer and cerebral hype. It is similar to the Mexican, in its effect; which could also explain another possible migration ^^

This Jamaican of her genetics is between the Colombian and the Mexican; she can reach 14 feet high, she is much more ramified than the Mexican. Like the Colombian woman, Jamaican can do more than these original strains because of the poor conditions of curing and drying of Jamaican farmers

As for the “Original” Jamaican, just like the Hawaiian, the Jamaican strains may express themselves better in their native country. This herb which can be considered as pure strain is much rarer and more reserved, its effect is joyful, euphoric, optimistic; of a "breathtaking" sensation that you will not find in commercials, even on site. Jamaica is famous for its live herb, for its different varieties “maybe all the herbs on the islands are unique, in that way. "

The laws against marijuana are seen as the symbol of Babylonian (non-divine) authority. The Rasta community vigorously resisted the laws, which led to heavy persecution by the police and "Elites" who saw Rastafarianism as a dissident force that united the "marginalized" in society. Thousands of Rastafarians have known prison; Jamaica's war on "drugs" is cultural, it limits itself to condemning Ganja users perceived to be dangerously creative and defiant. The Rastas have “simple lives” with an emphasis on family, health, natural food and ganja… The Jamaican “stimulates the inner being through spiritual discourse”, she looks like her people ^^

The Jamaican parliament in 2015 authorized possession of 57 grams of marijuana per person. Its use for medical or religious purposes for Rastafarians will also be regulated by law. Jamaica is nonetheless considered the largest Caribbean supplier of marijuana to the United States. 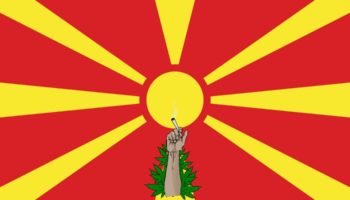