Last week the bees made the buzz on the networks. A French beekeeper is able to train bees for the production of a cannabis-based honey, the "cannahoney" ... The News arouses the attention of the media, but ...

Cannabis has no Nectar

Scientifically it is impossible to produce honey without a certain specificity, this famous nectar that does not exist in Cannabis. A few days after the buzz on the news of the NASA experience, the French beekeeper Nicolas Trainerbees "Bees Coach" informs us that cannabis was a honey plant ... (which produces honey). The original report put forward the French expert as an absolute leader, that he was able to "train" the bees to the exploitation of cannabis pollen, which surprised the experts of the whole world, since it is summarily recognized that Cannabis has no Nectar (Propolis), the Component necessary for the production of Honey.

Between 450 and 500 native species in France are called melliferous, that is to say that they offer bees enough to make honey (which is above all the food of the colony): nectar, pollen, honeydew ... All can not bee-pollinated by the bees, because the morphology of the flower must lend itself to it (the bee must be able to reach the nectar or the pollen). For butterflies, cluttered with their wings, it is even less obvious: the flowers with wide corolla are the most accessible. Pollen and flower nectar are the fundamentals of bee feeding.

Plants are developed in the way of attracting insects, as a kind of “Advertising”, color and smell are the bee's reward stimuli, better known as a liquid sugar for insects and for the plant : Nectar is the ultimate Symbiosis between plant and animal.

Bees collect nectar from flowers the only source of carbohydrates. Additionally, they collect pollen from a male plant and this is their only source of protein. This is the reason why the bees come from a center of exploitation in the first place (the Hives).

In the absence of nectar, Cannabis is among the plants which reproduce by the wind, the flowers even if sometimes colored, are considered as "inferior" stimuli (less attractive), which makes the plant unsightly and of little interest in bees or other insects.

But the main problem that discredits this experience is that cannabis does not produce nectar, and therefore bees can not prepare honey, and certainly not substances that improve the metabolism, the body of bees ... Even assuming a conditioning of bees, the feminization of cannabis, without nectar it is still impossible to make honey, and it does not exist in Cannabis ...

Social Networks has released a short video, as the unique and unequivocal proof that it is possible to condition bees for the production of honey ... Video "viral" for the general public for a marketing ploy ... Bees do not seem not collect the nectar on the video and do not engage in the work of preparing the honey ...

to read :  The 3D map of the DNA of the different strains

In fact, bees can reach cannabis plants in different ways:
• By a shortage of other flowers, he "tames" the predisposition of the bee, via an available food source (sugar water spray a few seconds before shooting).
• Sometimes, in the case of a shortage of pollen, bees can collect male pollen left by the wind, a nutrient considered significantly inferior in nutritional intake.
• The worker bees can exclusively take care of the case, their instinct is specific, they can not be tamed like other animals. Bees have learning abilities conditioned by a very complex reward system, which is difficult or even impossible to grumble in an artificial way ...

The site that broadcasted the first, was asked to source the video. The Beekeeper Expert who trained the bees to produce cannabis will argue to nothing ... 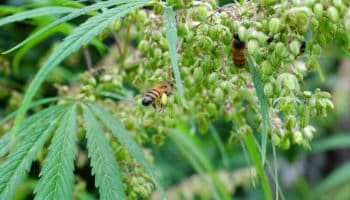 Hemp fields provide a source of pollen for stressed bees. 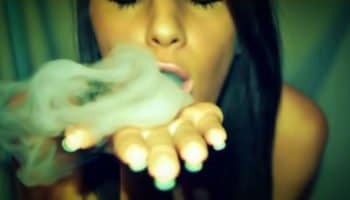 5 demystifications of the anti-cannabis argument 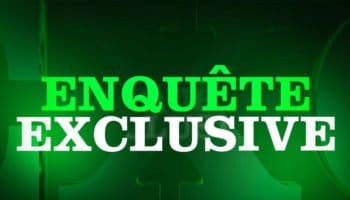