According to officials, California's forest fires are now the most important in the country's history. Nothing seems to stop the flames ... Since the end of July, California has been facing the worst fire in its history. Called “Mendocino Complex”, this fiery monster has already devoured more than 117.600 hectares. With the most devastating blazes tearing the land of cannabis ablaze, houses, farms and farms ready for harvest in Mendocino ...

California disaster for the cannabis industry

While the fires last year, which affected 30-40% of cannabis growers in California. But, the damage seems even greater this year, after the legalization of recreational cannabis in January 2018.

Many of the 10 000 cannabis producers in Mendocino County are located in some of the driest areas of the state, where the extreme heat and strong winds of Santa Ana ravage the Mendocino complex.

Last month, in Greenville, east of Mendocino, in Las Plumas County, a major fire ravages at least eight greenhouses containing some of California's most coveted herbs. Known as “Terp Town”, the farm is owned by Loudpack. It is the city's largest employer, providing dispensaries statewide. None of the 300 workers at the facility were injured or killed. But the company continues to assess the damage.

At the end of July, north-west, near Redding, Shasta County, several buildings operated by Alien Labs, another major cannabis producer, sank into the fire, seven people were killed and the fire consumed more than 810 hectares ...

to read :  Prehistoric traces of cannabis discovered in Japan

During the weekend, the police stopped three men in the city of Nice for interfering with a rescue operation. Indeed, they refused to stop watering their cannabis plants and evacuate the area.

Hezekiah Allen, Executive Director of the California Growers Association, said information on affected farms could begin as soon as evacuation orders are lifted. He says the industry is better informed about how cannabis is affected by forest fires.

He explained that the plants growing near the flames were often unharmed… According to him, cannabis slows down or even stops fires… According to the latest figures published by the California Department of Forests on August 8, 2108, we cannot contain half of these fires ...

The Worldview mission shows the fires in the world in real time. © Nasa, EOSDIS 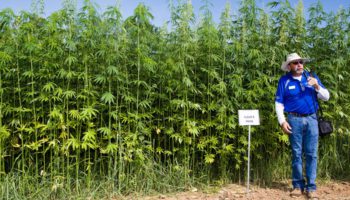