The Infatuation of Seniors

Lifestyle on August 30, 2016 Law Medicine Fashion
The Infatuation of Seniors
Content hide
1. Seniors' Craze - The 3rd age favorable to therapeutic & recreational use of cannabis
1.1. Seniors favor decriminalization
1.2. The case of Florida
1.3. The "modern" drug
1.4. A cannabis forest among French menagenarians

Seniors, especially boomers, are in favor of the legalization of cannabis; most of them advocate therapeutic cannabis, prompting the medical community to change their prescription… Secretly, the sixties cultivate their passion, still considered illegal…

More and more seniors are in favor of decriminalizing cannabis, as evidenced by the American case and its 25 states to have promulgated marijuana as a public health use. But federal law expressly prohibits its use, cultivation and sale, considering the plant as having "no medical use".

Cannabis is framed in too self-serving laws, strongly targeted against the uninhibited use of a substance considered by the feds as equal to the worst drugs currently rife in their territory, such as heroin (opioid). Despite an urging the administration not to prosecute doctors and patients, cannabis is confined to state laws.

The case of Florida

Seniors are among the most favorable to legalization in Florida, according to the University of Quinnipiac. The over 65s would overwhelmingly favor cannabis for therapeutic use. Although 62% of 50-64 year olds admitted to having smoked ganja, they also remain “overwhelmingly” against recreational use of marijuana, which is not a fixed figure given the current craze of people in the third age. .

Ben Pollara, manager of the United for Care campaign (for medical cannabis in Florida) says:

“The opinions we hear among older voters are not that different from that of the general electorate. For the most part, this is not a controversial subject ... If their doctor recommends a particular treatment, whether it is medication, diet, exercise or exercise. use of medical cannabis, they should be able to follow their doctor's orders without being treated like criminals. "

Florida became, Friday, May 2, 2014, the 22nd US state to legalize cannabis for medical use, particularly in cases of cancer or epilepsy. The law, passed the day before by the Florida House of Representatives, was approved by the local Senate.

“I am a father and a grandfather. I want my children and grandchildren to have access to the care they want, ”Governor Rick Scott said

Americans over 65, who make up only 14% of the total population, mostly use (30%) heavy-duty prescription drugs, including highly addictive pain relievers. They (like most countries) use opioids like Vicodin for chronic pain (morphine). But it is clear that this kind of drug is highly addictive and does not promote beneficial treatment, the worse it may prove ineffective in the long term.

Dr. Igor Grant, a distinguished professor and chairman of the department of psychiatry at the University of California, San Diego says that

"First of all, there is growing evidence that cannabis is useful in managing certain types of pain"

Cannabis could allow the elderly to feel better: reduced pain, increased appetite, improved mood and sleep, prevention of Alzheimer's ... But also against the acute pain felt by nerve damage caused between another by chemotherapy or diabetes… so many beneficial properties which are currently being studied and validated.

A cannabis forest among French menagenarians

But what we know much less are the proven cases of retirees cultivating their cannabis themselves. A real passion for most of them, and an excellent way to round off their already very difficult end of the month ... As evidenced by many cases around the world, and in particular in France :

In August 2012, in Saint-Juéry, in the Tarn, a 74-year-old retiree was reported to the police. The latter had discovered at his home 77 plants of cannabis. A man of the same age, in September 2013, at Pouget, near Montpellier; the gendarmes had discovered at his home 52 cultivated plants. The man lived without electricity, for lack of money. September 2013, a veritable forest of cannabis is found in a sexagenarian living in Isère. Its crops extended over nearly 5000 m2. In all 500 feet, some of which reached 3 meters in height, were discovered, for a weight of 1,9 tons. He did not hesitate to say that this production was intended for his personal consumption ...

A grandma was denounced by a member of the staff of a retirement home in Tréport, Seine-Maritime. The granny had been consuming weed for 40 years and liked to "smoke a firecracker in front of an episode of Inspector Derrick".

She admitted having initiated and then fueled a resale network among retirees. The granny was denounced when she was preparing to offer 7 grams of cannabis to the 64 years of a comrade. She explained that cannabis was used to calm her pain and that of others ... 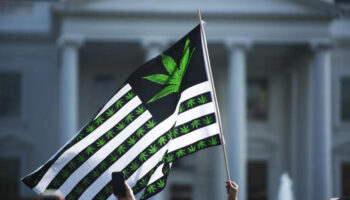