Morocco is the biggest exporter of kif in Europe, but its culture remains illegal and conducive to traffickers

Morocco is still the main exporter of kif in Europe. The cultivation of kif - cannabis resin and also the main component of hashish has long been legally cultivated in the Rif region. But, without real solution, Morocco prohibits the cultivation of cannabis, to the profit of the lobby of traffickers.

The leading producer of kif in Europe

According to European Monitoring Center for Drugs and Drug Addiction report 2017, the majority of cannabis consumed by inhabitants of the European Union imported from abroad comes from Morocco. Since 1956, the year of Morocco's independence, this culture has nonetheless become contrary to the legislation in force. Tens of thousands of families living from this trade, this induces a major societal problem.

Naturally, the production passed into the hands of the traffickers. In particular those located for the most part in Holland, where the law authorizes the production of hallucinogenic substances. However, Moroccan traffickers face new competitors.

“Recent reports reveal changes in the routes of cannabis trafficking: trafficking from the Western Balkans, and in particular from thein Albania, is on the rise for cannabis herb and oil, ”the report notes. At issue: the growing cultivation of cannabis in these countries. Libya has also become "an important hub for resin trafficking to various destinations, including Europe".

Faced with trafficking, the Moroccan state has considered replacing fields of cannabis with fields of wheat… Excluding wheat, with a yield ten times lower than that of Moroccan kif for the same area. This is not likely to arrange the families living from the cultivation of cannabis.

to read :  New York: The benefits of legalization outweigh the disadvantages

Without real solutions, the small kif producers work illegally to support their families. Collaboration with narco-traffickers is essential, and they make a juicy profit on the European continent ...

However the PAM (party of authenticity and modernity) tabled in 2015 a bill in parliament to legalize the production of kif for medical and industrial use. But the proposal was rejected by the authorities. Because it risked setting fire to the powder in a region conducive to rebellion ...

In addition, drug traffickers have a powerful lobby that has tipped the scales against possible legislation. An authorization to cultivate cannabis on Moroccan soil would cause considerable upheaval in their system. 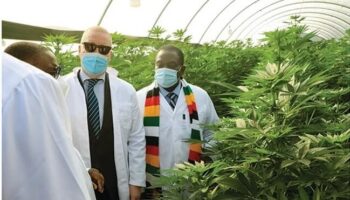