Business on February 11 2020 Careers US by weedmaster

In January 2020, the legal cannabis industry in the United States (medical + recreational) created more than 240000 new jobs. In the past year alone, 33700 jobs have been created, an increase of 15% each year, according to a new report published by the Leafly website.

The most important job creators in the industry are the states that have legalized California with 39804 jobs, Colorado with 34705, Washington with 23 et Oregon with 18But Florida 15498 and Arizona 15059.

In detail, according to the full report, out of 243700 new jobs, 165730 jobs are in 11 U.S. states that have been approved for the complete legalization of cannabis. The rest are states where only medical cannabis is allowed

The most incredible thing is that the 110% growth in cannabis jobs will have occurred over just three years.

These states are booming

Some states like Colorado and Washington opened their stores in 2014 and are starting to feel that the growth in cannabis use is starting to plateau.

Meanwhile, newly legal states, such as Florida (medical) and Nevada (adult use), are experiencing job booms with dramatic gains:

California, Massachusetts, Oklahoma, Florida and Arkansas are looking for talent and they need it now!

How to get a job? 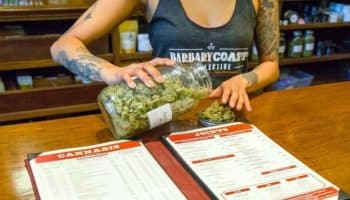